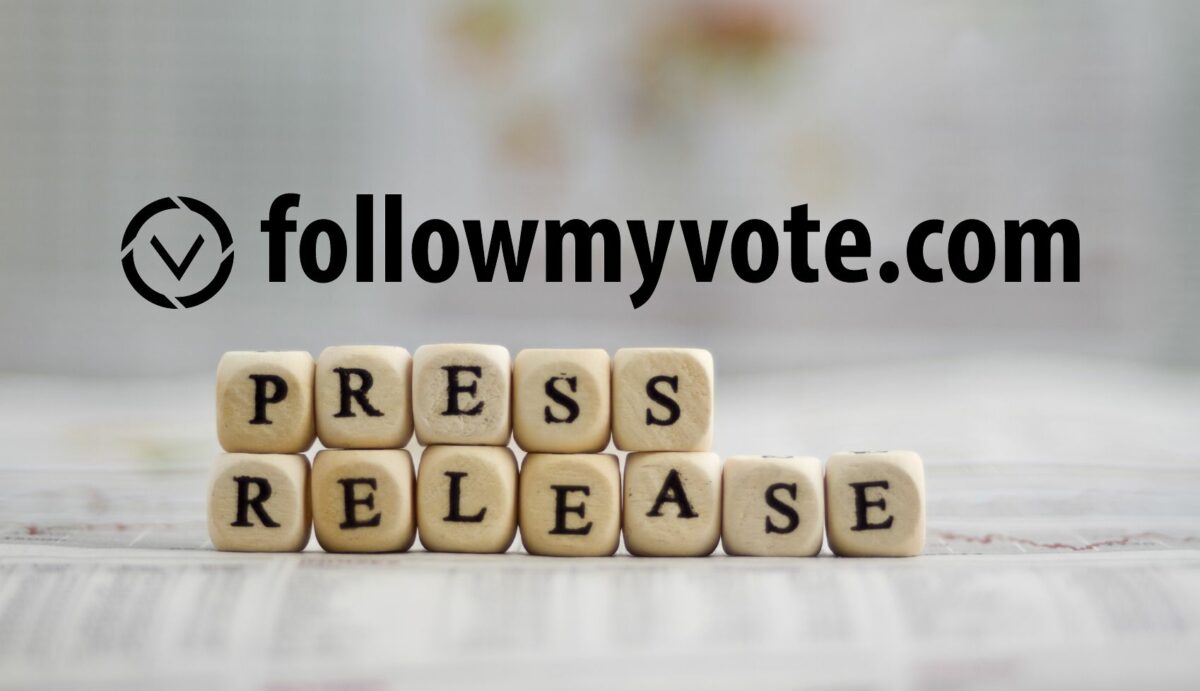 Here you can find the latest press releases for Follow My Vote:

Blacksburg, VA — Blockchain voting company, Follow My Vote, has released the Alpha version of their stake weighted voting software.
The alpha version runs on a blockchain using the open-source Graphene Blockchain Framework architected and developed by Follow My Vote CTO, Nathan Hourt and Dan Larimer of Steemit Inc. Other projects that have utilized Graphene include BitShares, Steem, and Muse.

Features and functionality that can be explored in the alpha release include publishing of contests, casting votes, and tallying contest results. TLS Encryption using the blockchain as the certificate authority has also been established for client and server communication.

“I am excited to present the alpha of our stake-weighted voting system. Although it is not yet feature complete, this version has the core components, all utilizing a live Graphene blockchain as the data store and public key infrastructure. This alpha serves not only as a demonstration of our technology, but also as the foundation for development of our more advanced anonymous, verified identity system which we will use to run a parallel election to the United States Presidential Election in November.”

This release follows the recent crowdfunding success of Follow My Vote on Kickstarter. On July 4th, the team achieved their funding goal for their Parallel Presidential Election Experience. One of the most popular rewards offered during their Kickstarter campaign was MERITs, which are digital crypto-currency tokens. When Follow My Vote is deciding on features to build into their open-source software, they will run stake-weighted polls within the voting software to prioritize development based on market demand. These polls will be weighted in MERIT. Therefore, holders of MERIT will help set the direction of Follow My Vote’s software development.

FOLLOW MY VOTE & FREE AND EQUAL TEAM UP TO ADVANCE AND REFORM U.S. VOTING

Blacksburg, VA — To improve voting across the United States, The Free and Equal Elections Foundation is working closely together with blockchain voting company, Follow My Vote.

“I believe that ‘more voices, more choices’ will help shift the political power back to the people, away from the control of a few corporations and political elites, creating a more balanced system where all are free and equal in their ability to participate. This can only happen with honest voting, and Follow My Vote provides the most transparent and verifiable voting process I have ever seen.”

-Christina Tobin, Founder of The Free and Equal Elections Foundation

“This country needs more heroes like Christina Tobin and the rest of the folks at FreeAndEqual.org. The time to stand up and fight for free and fair elections is now! At Follow My Vote, we are developing a verifiable blockchain voting system that supports early voting and changing your vote in the days leading up to the election, not to mention real-time results. Combining these features with our ability to support a variety of voting styles and tallying algorithms, such as approval voting and rank-choice voting, our software effectively levels the playing field for all candidates. As the CEO of Follow My Vote, I am proud to call Christina Tobin a friend, colleague, and ally in fighting the good fight on behalf of ‘We the People.'”

FOLLOW MY VOTE LAUNCHES CROWDFUNDING CAMPAIGN FOR VERIFIABLE OPEN-SOURCE BLOCKCHAIN VOTING SOFTWARE, MAKING VOTING HONEST AND CONVENIENT, ONCE AND FOR ALL.

Blacksburg, VA — On April 13, 2016, Follow My Vote launched a Kickstarter campaign to help fund the voting platform of the future, powered by blockchain technology. The project aims to bring transparency, convenience, and security to elections and polls of all kinds.

“The future of government is in open-source technologies and providing transparent election results will aid to restoring faith in vote counting. I support efforts, like those used by Follow My Vote, that explore how open-source software can lead to greater transparency, integrity and participation in voting.”

Voting today is filled with accusations of illegitimacy. This is mostly due to the current systems and methods in use, which can be extremely vulnerable.

Follow My Vote is solving this voting crisis with innovative technologies. A voting platform that can gain transparency into elections, without compromising voter privacy will ensure that election results are accurate. Follow My Vote is accomplishing this by using blockchain technology and elliptic curve cryptography to build an open-source platform that is secure and truly verifiable from end to end.

The funds raised from their Kickstarter crowdfunding campaign will go towards completion of the project and demonstrating the power of blockchain voting to the world.

“I have poured my life savings into Follow My Vote. When that wasn’t enough, I cashed out my 401K and maxed out my credit cards. We are so close to making history, I can feel it in my bones. I am confident that my fellow Millennials will find it in their hearts to fund this campaign, so that we can get the job done.”

– Adam Ernest, Co-founder and CEO at Follow My Vote

Follow My Vote plans to demonstrate their game-changing technology by hosting an election in parallel to the U.S. 2016 Presidential Election. They are now allowing people to sign up to participate.