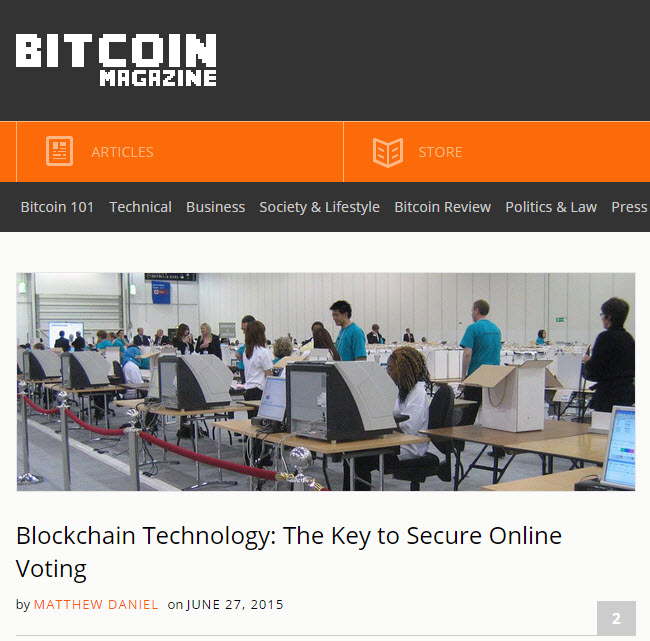 We are proud to say Follow My Vote has been featured on the well known publication, Bitcoin Magazine! This is our latest press recognition and we are quite thrilled. Bitcoin Magazine is one of the most engaging and accurate sources of information regarding Bitcoin, blockchain technology, and the digital currency space. Currently they receive over 85,000 unique monthly visitors. This means a lot more people just got exposed to Follow My Vote and our revolutionary voting platform!

The author, Mathew Daniel did an excellent job covering how blockchain technology is going to completely revolutionize the voting space and the companies attempting to lead this disruption. Our Founder and CEO, Adam Ernest was prominently featured in the article as well. He explained the mission Follow My Vote is on, some of the misconceptions about online voting, and our educational campaigns. Here is a quick highlight from the article.

There are,­­ however, increasing examples of political organizations and technology startups experimenting with secure digital voting systems based on the use of Bitcoin’s blockchain technology. Last year Denmark’s Liberal Alliance became the first political party to vote using a blockchain-based system for its internal elections. Similar systems have since been adopted in Norway and Spain and the movement is gathering momentum in the United States.

“There is a common misconception that voting cannot be done online in a secure way. However, the introduction of blockchain technology is changing the conversation,” Adam Ernest, CEO of Virginia-based FollowMyVote – an organization committed to developing an online open source, transparent voting platform – explains.

Adam also discussed Follow My Vote’s plan to get the people to lobby on our behalf. Many government officials are satisfied with the current voting systems and they have yet to hear about blockchain technology and its applications for voting.

“Pushing for provably honest elections in the U.S. and abroad, we have a tremendous amount of money and influence stacked against us,” he said.

As a result, FollowMyVote is changing its approach. Instead of trying to lobby election officials or legislators whom they feel have no incentive to improve the voting process in the U.S., it is preparing to launch an educational marketing campaign targeted directly at the voter in an attempt to get them to lobby the government.

The article also covered our technology partner, BitShares and their Smartchain technology.

Ernest notes that this concept is gaining much traction in countries such as Norway, Iceland and Germany. FollowMyVote, in partnership with BitShares and Cryptonomex, Inc., is working on a voting platform that is integrated directly with the BitShares 2.0 Smartchain that supports this use case.

Please share our blog post and the Bitcoin Magazine article! More people need to know about blockchain technology and the fact that online voting can be secure.

Why You Should Support Secure Mobile Voting And Provably Honest Elections.

Voter Apathy At All Time High