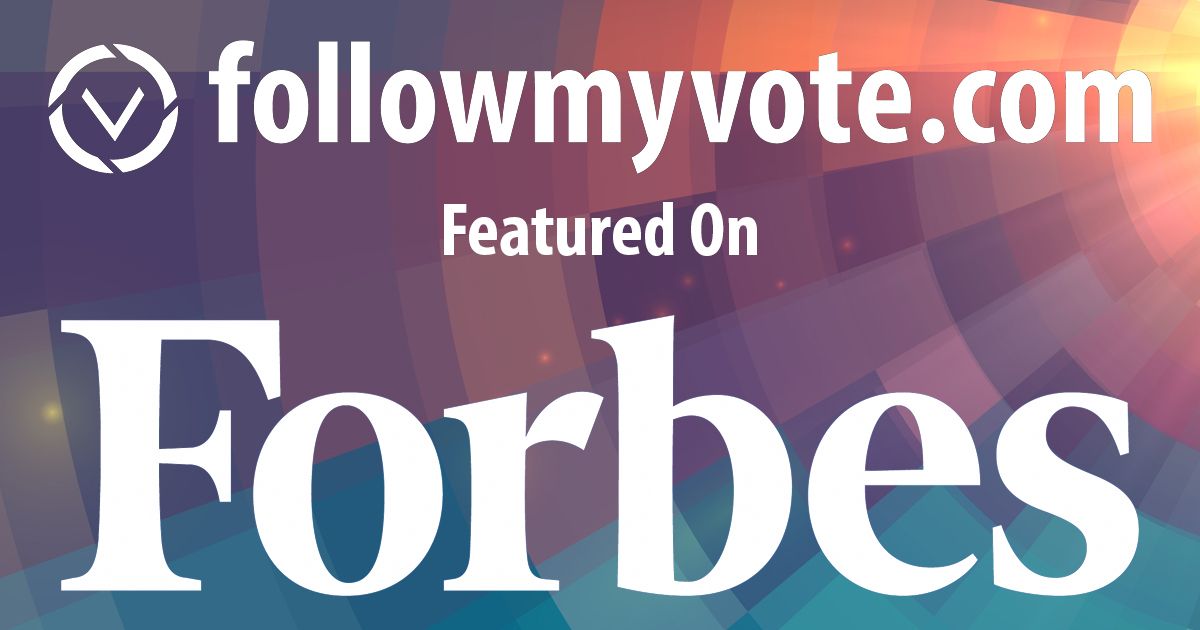 Follow My Vote can now add Forbes to the list of media publications discussing blockchain voting and Follow My Vote’s end-to-end verifiable voting software. Author Jackie Burns Koven has written an unbiased article on Forbes.com that uncovers the progress and realtiy of blockchain voting for use in political elections. Numerous articles are coming out that are very one sided. The content is blatantly for or against blockchain voting. This article is refreshing as it incorporates quotes and opinions from advocates and opponents. This gives the reader a more holistic view and understanding of the state of blockchain voting.  Ms. Burns Koven is a Research Assistant of Technology & Public Policy at Columbia’s School of International and Public Affairs.

Nathan Hourt, Follow My Vote Co-founder and CTO, is quoted several times throughout the article. Hourt eloquently explains risks that are neutralized with an end-to-end verifiable system.

We have included part of the Forbes article for you to read:

With accusations of election rigging and an unprecedented hack of a political party’s emails, voting security has not been this hot of an issue since Bush v. Gore and the Florida recount of 2000. Adding fuel to the fire is the FBI’s latest revelation of foreign hacking into two states’ election databases. Now, Washington officials are increasingly concerned that hackers will seek to infiltrate the decades-out-of-date voting machines with very little technical sophistication and manipulate votes cast for the next U.S. president in November.

Some cybersecurity experts have advocated for the ultimate security measure to protect U.S. elections from foreign tampering—that is, offline paper-based elections.

Yet in Virginia, the state that famously decommissioned its terrifyingly hackable voting machines last year, the startup Follow My Vote believes the solution to safeguard against vote rigging isn’t to revert to no or low-tech, but through the adoption of blockchain technology.

Aside from the obvious issue of scale, Follow My Vote’s cofounder and CTO Nathan Hourt considers paper-based voting systems precariously reliant on the procedural security of officials conducting their jobs correctly and honestly. In offline systems, “there is no way to detect a breach of security… no way to determine if all of the original ballots are still present, if any extra ballots have been added, or if any ballots have been tampered with,” Hourt argues. The risks are amplified in national elections. “The more voters a paper-based system attempts to accommodate, the easier it becomes for a fraudster to corrupt.”

Envisioning a future for e-voting

Follow My Vote aims to combat electoral fraud and protect user credentials by developing a convenient and secure end-to-end voting system that is also open-source and auditable. In their model, voters would skip the lines to cast votes online from home using a webcam and government-issued ID. The virtual electorate could then theoretically watch the election in real-time entrusting the veracity of results to the underlying blockchain auditability features.

How can a voting platform that touts transparency also be secure? Cryptography protects each ballot against tampering from end to end, keeping votes anonymous and immutable though tamper-evident on the blockchain ledger. Each voter can change his or her vote at any time during the election using a private key and unique voter ID.

Dr. Feng Hao co-lead of the Secure & Resilient Systems group at Newcastle University’s School of Computing Science argues that “end to end verifiable voting systems have the merit of allowing a voter to verify if their vote is correctly recorded and correctly included into the tallying process—and if ballots are missing in transit or modified, it can be detected by voters.”

Read the rest of the article on Forbes.