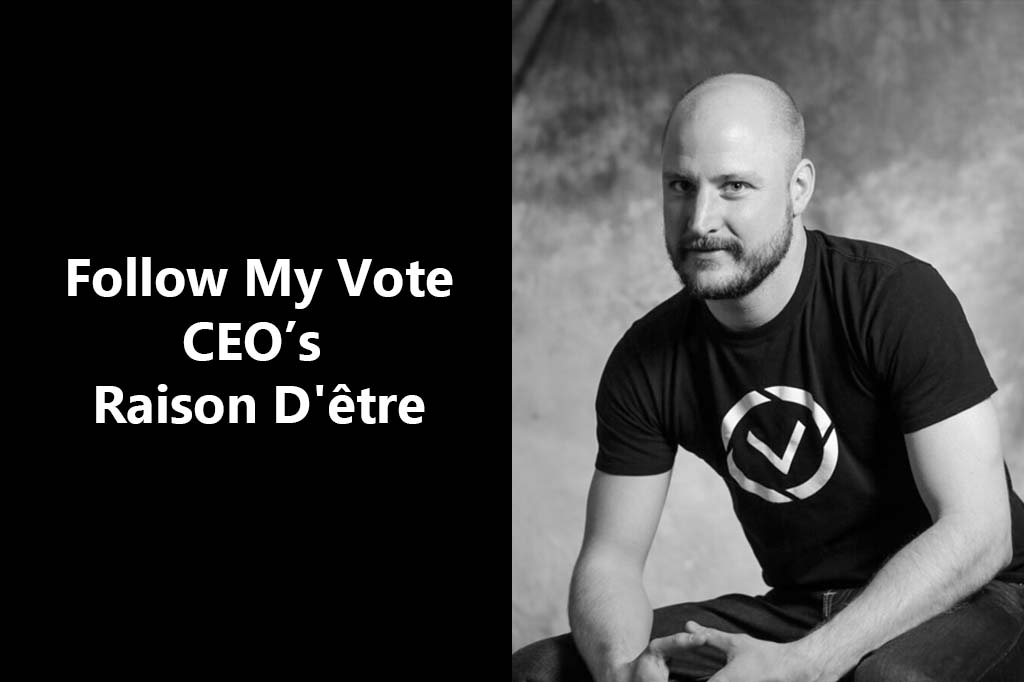 In the following video, Follow My Vote Co-founder and CEO Adam Ernest explains his raison d’être. This is his reason and calling for innovating in the elections industry.

It all goes back to the George Bush vs Al Gore Election of 2000, which was an extremely controversial election. Ernest’s father was a government contractor and his family was living overseas at the time. His only option was to cast his ballot via the postal mail. On Election Night, as reports of election results came rolling in, the outcome became highly contested and litigation ensued. When the supreme court ultimately ruled to stop a recount taking place in Florida, it made Ernest question what really happened behind the scenes, starting with whether or not his ballot was even counted, and everything about the United States government thereafter. At the age of 18, this was the first election he was allowed to participate in, and his faith in the democratic process was shaken to the core. It was at this moment he identified the problem (the need for a secure end-to-end verifiable voting system to make elections honest/transparent); however, he had no clue how to go about solving it at the time.

Fast forward to 2014, when Ernest learned about the advantages of blockchain technology and how it could be leveraged to develop a secure end-to-end verifiable voting system, we pivoted and this initiative became the sole focus of Follow My Vote’s business operations.

Upon making our plans public, the Pirate Party of Norway took notice, among many others.

The video was recorded in 2015 when Ernest was invited overseas to attend a national summit meeting for the Pirate Party of Norway, where he introduced Follow My Vote’s designs for a secure end-to-end verifiable blockchain-based voting system to Pirate Party members and citizens of Norway. And, the presentation couldn’t have been more well received.

20 years later and the story of US elections has not changed. The 2020 presidential election was just as controversial as the Bush vs Gore election. Donald Trump and Joseph Biden found themselves in an eerily similar position. While the reported results were not as close as the 2000 election, the contest was questioned just as much. Many people simply refused to acknowledge and believe the outcome was true. Even the Trump campaign would not concede to the loss and filed a total of 63 lawsuits in an attempt to overturn the results. Many people are still outraged over the conclusion and accusations have come from both sides.

The time has come to solve this problem, once and for all. The technology needed to bring forth this type of solution is within reach. And, the world needs it now more than ever.

Adam Ernest – Co-Founder and CEO at Follow My Vote

When will we see honest and fair elections? Follow My Vote intends to make secure verifiable mobile blockchain-based voting a reality, so there will be nothing to contest. By using a distributed ledger, all participants will be able to verify the election results themselves and faith will be restored.

If you feel elections can be hosted in a modern and secure way like we do, please join our movement! You can sign up for our supporters list and stay updated on our efforts and progress. We also accept donations (Follow My Vote is a registered public benefit corporation) and we are currently recruiting development help through our Dev Challenge.

Questions about our technology and software can be answered on our FAQ page and via our contact form.

A Word for Voatz