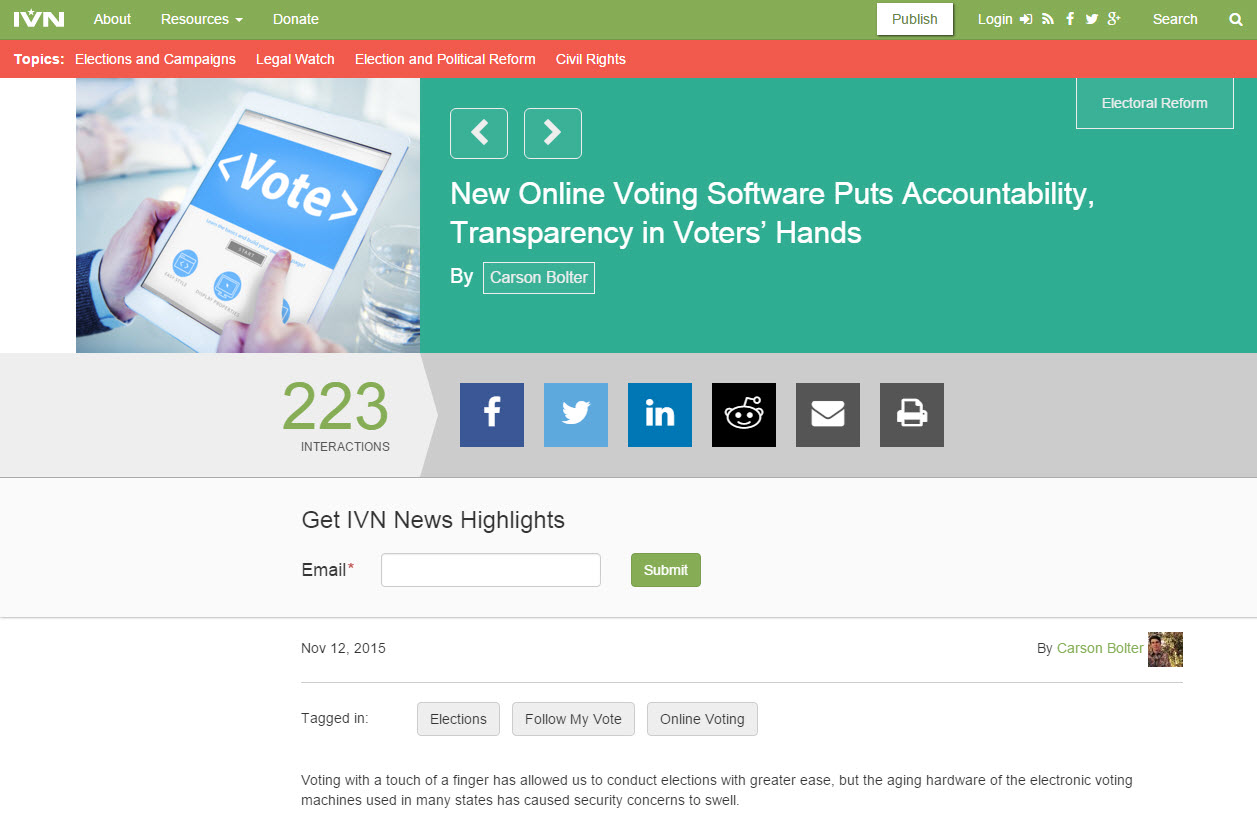 Check out our voting technology in the press! We were recently featured in an article on Independent Voter Network (IVN), a website dedicated to unfiltered, independent political news. “Follow My Vote is trying to offer an alternative solution to voting machines, and redefine how we look at elections,” according to  the author, Carson Bolter. He highlights many of the central flaws surrounding the current voting technology used today. Some of these security flaws include unsecured wireless networks and machines experiencing multiple crashes on election day.

“To us, part of fixing the process means the ability to independently audit an election. Without transparency, there is absolutely no definitive way that people can verify that their votes have been accurately recorded and stored, and that the results of the election have not been tampered with.” – Adam Ernest, CEO

Those who count the votes in an election are the ones who hold the power. At Follow My Vote, we are offering a decentralized election solution with transparent and mathematically proven results. Anyone who is curious to see the numbers, can and should be able to verify them. Lest we end up with another legal battle, like that in Kansas, just to see voting machine tapes.

How are we offering this secure e-voting technology? Well, look no further than blockchain technology and elliptic curve cryptography.

“We’re using this technology to allow people to audit not only their own vote, but an entire election. It’s very powerful for voters to be able to follow their vote and engage in the political process from anywhere using any device. Many people are dissatisfied with the political environment, and our software will help to increase voter turnout, especially among the younger generations.” – Adam Ernest, CEO

For anyone who reads our blog and knows what we are attempting to do, you know that we face an uphill battle. We love to see our voting technology in the press, as it shines more light on our message. To those who are on board with our voting revolution, we ask for your continued support. There are still many folks that say online voting will never be secure. To the naysayers, we ask – why not give it a try first? In 2016, Follow My Vote will be hosting a parallel presidential election. Together, let’s show the world that decentralized, verifiable e-voting is finally here to stay.