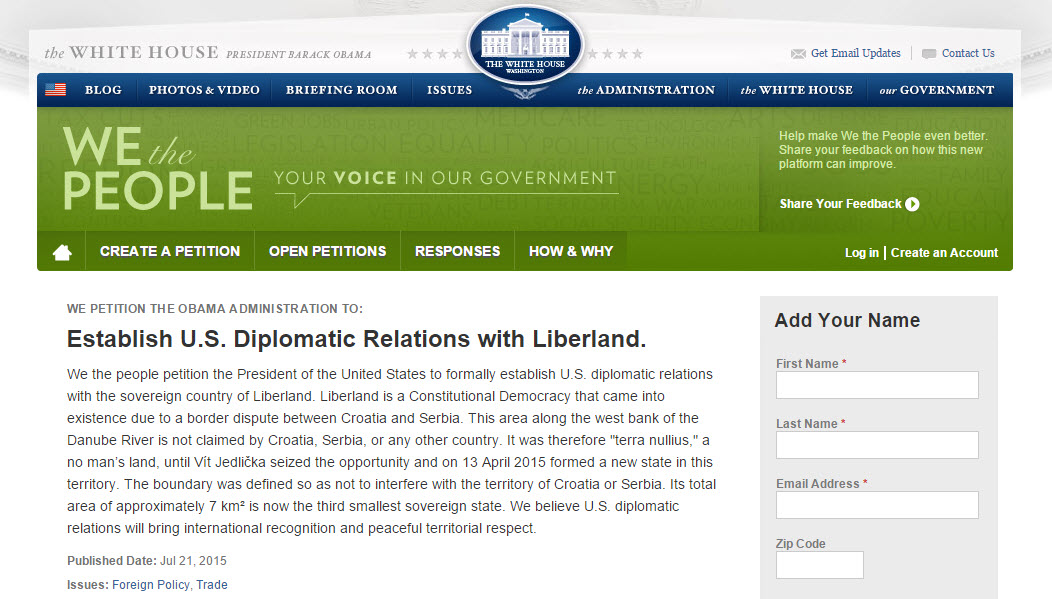 Here at Follow My vote, we have been closely following the rise of Liberland. Liberland is a new micro-nation and sovereign state located between Croatia and Serbia, on the west bank of the Danube river.

Currently there is a petition to establish US diplomatic relations with Liberland on petitions.whitehouse.gov. We know that our fans and readers are interested in Liberland and thought we would shine some light on this petition.

Establish U.S. Diplomatic Relations with Liberland.
We the people petition the President of the United States to formally establish U.S. diplomatic relations with the sovereign country of Liberland. Liberland is a Constitutional Democracy that came into existence due to a border dispute between Croatia and Serbia. This area along the west bank of the Danube River is not claimed by Croatia, Serbia, or any other country. It was therefore “terra nullius,” a no man’s land, until Vít Jedlička seized the opportunity and on 13 April 2015 formed a new state in this territory. The boundary was defined so as not to interfere with the territory of Croatia or Serbia. Its total area of approximately 7 km² is now the third smallest sovereign state. We believe U.S. diplomatic relations will bring international recognition and peaceful territorial respect.

Please check out our other Liberland posts here: The beginning of Liberland , Follow My Vote at Freedom Fest (where we met the President of Liberland)

Note: Follow My Vote is a non partisan oragnization and does not endorse parties or countries. We will however, continue to follow the rise of Liberland and petitions we feel our readers would like to know about.